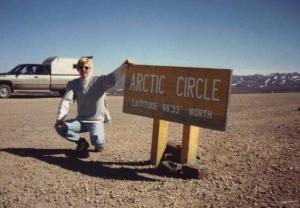 Oliver Phipps at the Arctic Circle 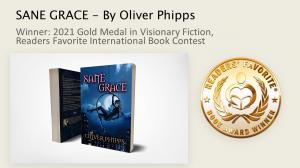 We ventured all the way up to the Arctic Circle. We trudged through the Klondike mountains and panned for gold from the Yukon River.”

Fame, like money, eludes many that seek it. Yet, oddly enough, many that have little interest in it seem to attract it in abundance.

Locating authors to interview is like finding Easter eggs on Easter Sunday. With a few connections, it becomes not a matter of finding one, but deciding which one will be worth the time and effort.

The subtle dusting of fame for author Oliver Phipps began some years ago as one of his books, A Tempest Soul, had received recognition through an international book contest.

Further investigation revealed a truly unique storyline that remined me more of the old fireside story tellers than a current formulated and predictable assembly line book.

Thus began the pursuit of an interview with what I would find to be an elusive and unapologetically non-mainstream writer, Oliver Phipps.

After a venture into standard and nonstandard channels of communication and requests, along with undisclosed challenges and labors indicative to the field of freelance reporting, I humbly present to you, the reader, the result of my endeavor; the Oliver Phipps interview; aka, Life Meets Fiction.

Grant: “First, I would like to congratulate you on the recent Readers Favorite award for Sane Grace. I know it’s not your first award, so how do you feel about this one and is there any inside information you can relay?”

Oliver: “Thank you, Grant. I’m honored to receive the award, and although I had hoped for a gold medal, I was still pleasantly surprised to get the news that Sane Grace had taken the gold medal in its category.

“Sane Grace is one of those fun stories that seemed to just flow out as the plot developed. The idea was to keep Lieutenant Grace Wolfe as the ultimate ‘wild card,’ so to speak. That was the “fun” ingredient, and the reader ultimately has to decide how he or she feels about Grace’s character.”

Grant: “I know you served as a paratrooper in the United States Army. But I’ve not found much information of your service time. Is that intentional, or?”

Oliver: “It’s not necessarily intentional. I served in the 82nd Airborne Division from 1983 through 1986. When I arrived at Fort Bragg, my unit had just returned from Grenada. Life in the 82nd was fast-paced and exciting. I bought a chopper and a fast car, both of which were on my wish list. While not on maneuvers, I was generally living the soldier’s life.”

Grant: “Great, now your book, “The House on Cooper Lane.” This is your most popular book, and if I’m not mistaken, it has hit number one in its category on Amazon. Is there any little extra morsel you can give us concerning your time in that haunted house? I’m sure our readers would love to hear anything else about the old Cooper place.”

Oliver: “Well, to really grasp the story as an actual event, one must consider that the haunting occurred over the period of several months. So, there were many little things that happened after I realized I was not alone in the house. Some of these things were simple and would not have really added to the storyline, itself. One thing was me coming home from work to find half the cabinets in the kitchen area open. This happened on several occasions.”

Grant: “That’s great! I would certainly be shocked to come home and find kitchen cabinets opened by themselves or….

“So, there seems to be so much to touch on; you lived in a haunted house, served as a paratrooper in the army. Then you were in a rock band, or rock and roll bands? Can you give us a little on that?”

Oliver: “Certainly, after leaving the army, I bought a set of drums. I then took drum lessons and went to various drum workshops and eventually began playing with bands. As I got better, I played with better bands, and in the mid-1990s, I focused on my music as I also began writing lyrics around this time. I had some success. But I realized it was a very competitive business and without lucking into a group that just naturally clicked and worked well together, it would be a longshot to make a living at it.”

Grant: ” Wow, very interesting. I know you’ve been a lot of places, but Alaska to me, is just so interesting in a wild sort of way. And if I’m not mistaken, you were… gold prospecting?”

Oliver:” Yes, we ventured all the way up to the Arctic Circle. We trudged through the Klondike mountains and panned for gold from the Yukon River. It was quite an adventure, and one that spurred the tale, Tears of Abandon. After visiting ghost towns in the Alaskan outback, I realized there is very likely old ghost towns that have been lost to time and may only remain in the memory or old tales of the Alaskan people.”

Grant: “I love that book. So, you actually explored old Alaskan ghost towns?”

Oliver: “Absolutely, and I have an old bottle from one of those ghost towns. So, you see there is a connection there from my time in Alaska, as well as in the story.”

Grant: “Amazing, that is exactly what I was hoping for with this interview, Oliver. I just want to thank you so much for your time. Can you give us any information on your next book?”

Oliver: A little. I have several I’m working on. A dystopian novel with connections to Diver Creed Station. Also, a sci-fi trilogy that I hope to get out soon, or the first book at, least.”

About Grant Colbert: Grant is a freelance writer who focuses on information pieces and interviews of interesting personalities. He loves to travel and spend time with his family and friends when not writing.

Finally seeing some light at the end of the tunnel: European Travel Commission | Squawk Box Europe

Walford Home To Be Featured on GMA3’s “Deals & Steals”