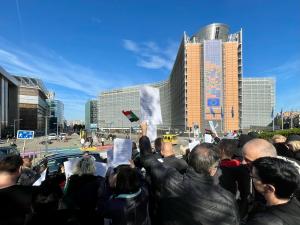 The European and Sudanese communities joined hands in a major protest in front of the European commission against General Al Burhan. (Photo Igor Pliner) 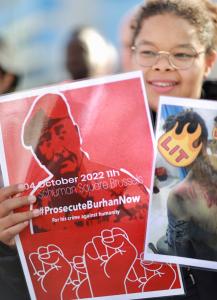 The protesters are asking the international community to prosecute Al Burhan before a war crimes tribunal. (Photo Igor Pliner) 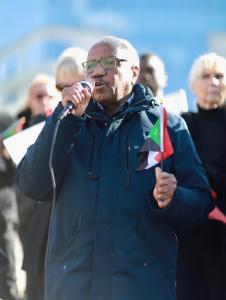 The representative of the Sudanese community in Belgium asked for justice after the massive repression by Al Burhan who does not tolerate opponents. (Photo Igor Pliner)

Since December 2021, security forces have forcibly disappeared scores of demonstrators and unjustly detained hundreds more as part of a bigger crackdown on dissent to the October 25th 2021 coup.”

— Manel Msalmi, European Association for the Defense of Minorities

BRUSSELS, BELGIUM, October 4, 2022 /EINPresswire.com/ — A total of some 150 demonstrators, spread over 3 hours, came to demonstrate at the headquarters of the European Commission this tuesday 4 October 2022 in the European capital of Brussels against the coup leader currently leading the government in Sudan. After the demonstration, a letter was also delivered to the External Action Service addressed to the High Representative of the European Union for Foreign Affairs and Security Policy, Mr. Joseph Borell. It was important to see that people also showed up from civil society movements in Europe in solidarity with the Sudanese community. The letter for Joseph Borell was eventually signed by The European Association for the Defense of Minorities, AIDL (International Alliance for the Defense of Rights and Liberties),World Council for Public Diplomacy and Community Dialogue, Postversa, Hiking For Children, Witteketik, The World Hindu Struggle Committee, Sudanese Community in Belgium,C. Justice Assembly, Constituante, Thinktank Carmenta, representatives of D19-20, The Fundamental Rights Movement, Pimpampoon Climate and peace action group, The International Development and Immigration Foundation (F.D.I.A). Some distinguished members of the Sudanese community were present and also gave a speech. These are the prominent members of Sudanese community in Belgium Yahia Omran, Mrs. Afaf Hassan, Mr. Bushra Alkabour, Mr. Abdul Azim Tabag, Mr. Othman Ahmed and Mohamed Hirika.

Manel Msalmi, president of the European Association for the Defense of Minorities:”The letter discusses the present situation in Sudan as well as the concerns of the Sudanese people, the Sudanese diaspora in Europe, and Belgium and a coalition of human rights organizations to convey their grave concern about the situation in Sudan, particularly the human rights violations targeting demonstrators and political activists. Since December 2021, security forces have forcibly disappeared scores of demonstrators and unjustly detained hundreds more as part of a bigger crackdown on dissent to the October 25th 2021 coup. Security agents allegedly used sexual abuse and rape threats against demonstrators. When arresting demonstrators during rallies, police, particularly anti-riot police and the Central Reserve Police (CRP), as well as other military forces sympathetic to Al Burhan, have brutally beaten and kicked them, in some instances indulging in sexual abuse. Many significant cities in Sudan have arbitrary detentions. Security forces often send protestors caught on the streets or at their homes to Khartoum’s two Criminal Investigation Department (CID) facilities, one in Khartoum and the other in Bahri. The Federal Investigation Police, as it is popularly called, is a component of the police that investigates major crimes. Children who took part in the protests have not been spared maltreatment or arbitrary arrest. The government has curtailed freedom of speech by shutting down the internet, and women’s rights are jeopardized. Domestic and other gender-based violence is on the rise in Sudan, as are new discriminatory legislation and patriarchal limits on women’s rights. Laws prohibiting women from working outside the house without the approval of their husband or father, as well as inequity in the family and workplace, were among the limitations emphasized. The government erected various legislative barriers to equality and reinforced existing social practices that oppress women and girls. We firmly think that the EU represents human rights, individual liberties, democracy, and gender equality. We encourage the European Union to denounce human rights crimes in Sudan and to put an end to the Burhan regime’s persecution of the Sudanese people immediately.”