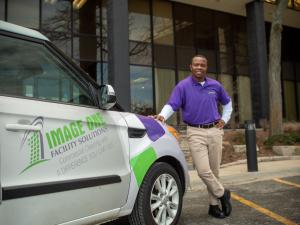 Andrew Raybon, a military veteran who served eight years in the U.S. Navy will become the franchise owner of Image One for parts of Atlanta and some of the surrounding suburbs. As a Junior Sailor, Raybon served as a key component in coordinating the third and fourth Inter-Korean Summits and ran his own administrative department for a construction battalion. His leadership and perseverance also earned him a Joint Service Commendation Medal. Raybon’s decision-making skills and organizational experience led him to becoming an Image One franchise owner.

“I am looking to become a staple in my community and someone who has the ability to operate an essential business at the highest level of expertise,” said Raybon, the franchise owner for Image One’s Atlanta Metro East location. “I’m very passionate about cleaning my workspace, as well as my home, so I see the value in helping people maintain their facilities in a more professional capacity.”

Franchising since 2011 and with a corporate headquarters in the Chicago suburbs, Image One launched a new franchise affiliate program in 2015 to further expand the franchise nationwide. Since then, the franchise has added owners in regions across the country, including in Cincinnati, Denver, Detroit, Fort Myers, Nashville, Orlando, and now Atlanta.

Image One provides necessary training, tools and support to help franchise affiliates build their business, including teaching franchisees the latest cleaning techniques and empowering them with insights on best-in-class equipment and technology. Ongoing training is delivered both at Image One’s corporate headquarters and onsite at existing client locations to ensure that franchisees continue to grow their own businesses.

“Andrew is a really hard worker, and I can tell he’s very dedicated to helping his community,” said Tim Conn, President and co-founder of Image One. “I look forward to seeing him pursue his aspirations as being the go-to expert on commercial cleaning in the metro-Atlanta area.”

The territory will include Atlanta’s downtown area, as well as areas to the east and southeast, including Redan, Decatur, and other towns in the southern half of Dekalb County. With his franchise location now in service, Raybon is also currently enrolled in graduate school at Northeastern University pursuing a Master’s Degree in Nonprofit Management. To further his involvement in the community, Raybon is becoming a member of the Stonecrest Chamber of Commerce. Additionally in his free time, he enjoys running marathons, traveling to new places, spending time with family, and engaging with people from all walks of life.

The cost to open an Image One franchise ranges from approximately $43,000 to $91,000. Startup costs are among the most affordable in the franchise industry.

For information on the franchise, visit https://www.imageoneusa.com/our-locations/atlanta-ga/.

Image One USA is a commercial cleaning services business. The Image One franchising model was formed on the principles of transparency, training, and top-notch financial and customer service support. It is regularly recognized as a top franchise by third-party franchise and business publications, including CNBC.com, Entrepreneur.com and Franchise Business Review.

Image One franchisees work for themselves in a unique relationship with the franchise company. Image One provides them with customer support for their business, ongoing training, along with assistance with billing, equipment and sales training. Image One has commercial cleaning franchise locations covering Chicago, Cincinnati, Dallas, Denver, Detroit, Fort Myers, Nashville, Orlando, and Atlanta. Franchise territories are available nationwide. For information on the franchise, visit http://ImageOneUSA.com

For more information on the brand, visit http://ImageOneUSA.com.