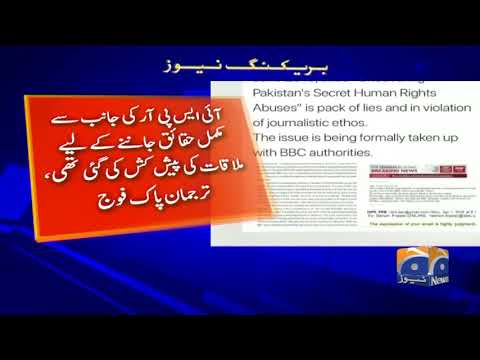 #GEOBREAKINGNEWS – ISPR terms BBC story on alleged Pakistan human rights abuses a ‘pack of lies’ – 04 June 2019 | #GEONEWS
RAWALPINDI: The Pakistan military on Monday refuted contents of a story published by British Broadcasting Corporation (BBC) on alleged human rights violations in Pakistan and termed it to be a “pack of lies and in violation of journalistic ethos”.

“The angling, spinning and credibility of the story is exposed from the fact that contrary to published claim, ISPR only received a judgmental questionnaire via email,” the statement read.

“In response, the ISPR offered full opportunity, even interaction to know the facts (copy attached). BBC team never responded and did a preconceived, conjectured story.”

The Pakistani military said the story was void of the context and understanding of the prevalent environment at that time.

“Contrary to the expression in the story, operation in North Waziristan as per the given date of so-called incident in the report had not yet started. The area (NWD) was being used by terrorists to plan, coordinate and execute terrorist activities across the country. On the average, 6-8 terrorist incidents per month were taking place across Pakistan, targeting children, women, schools, churches and markets. People were being slaughtered in NWD and terrorists were playing football with heads of their victims. NWD and local population were actually hostage to hardcore terrorists,” the ISPR explained.