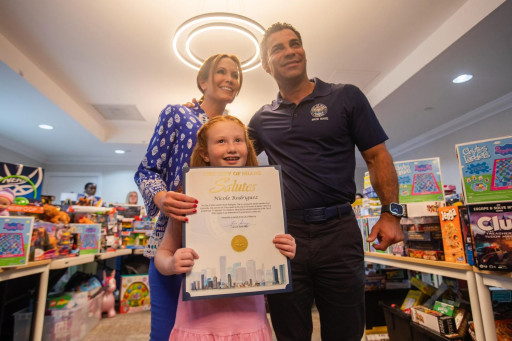 The host of Warrior Hearts has made a donation of toys in the name of her show and in conjunction with Hasbro Toys. Alongside Francis X. Suarez, the mayor or Miami, Denegri made the donation to a Miami foundation that provides treatment, care and support to child victims of sexual abuse and trafficking

Kristi House donation
Suarez alongside Denegri and her daughter, Nicole

Natalia Denegri, host of Warrior Hearts, has once again joined forces with Miami Mayor Francis Suarez to bring a Christmas surprise to Kristi House, a foundation that provides treatment, care - as well as legal, medical and emotional support - to children and young adults who have been victims of sexual abuse and human trafficking.

The event was held on Wednesday, Dec. 21 at the foundation's headquarters in Miami, Florida. Denegri, whose MegaTV children's program Warrior Hearts focuses on solidarity and social causes and who recently won 4 Emmy awards - adding to the 26 she already has - is also the spokesperson for Hasbro Toys, and donated hundreds of toys to the foundation, spreading joy to the children there before this holiday season. She was on hand to pass out the toys personally, along with her eight-year-old daughter Nicole, who was surprised to receive a diploma from the Mayor, recognizing her solidarity to the city. "I give you this because I am very proud of how you represent our city. Thank you!" said Suarez, as cameras captured the moment he bestowed the young girl with the award.

"You cannot put a price on a smile, especially the smile of those kids who've endured the worst traumas a person could endure [...] The fact that an organization like Kristi House is working to protect and help these kids, will undoubtedly affect the future of our society in a positive way [...]. I thank Hasbro Toys and Natalia Denegri for this donation and for always collaborating with the City of Miami through various charitable initiatives," Suarez added at the press conference to kick off the event in which each child received a Christmas present of their own.

"It's my honor to collaborate with Mayor Suarez, to continue to help children throughout our city. Miami has been my home for more than ten years, and it is where I formed my family. Helping the kids who need it the most is my way of giving back to the city that has given me so much. The work that Kristi House does to support sexually abused kids during the entire legal process, as well as in their adaptation back into society along with their families, is amazing. I am proud to be part of this event, and to bring a smile to the faces of these incredible kids this Christmas. Representing my show Warrior Hearts and Hasbro Toys, I know we share the same objective: to spread light where there is darkness," attested Denegri.

Original Source: Natalia Denegri Joins the Mayor of Miami in Bringing a Christmas Surprise to Child Victims of Abuse

Maximize Your Employee Benefits With These Three Tips

The 2022 Greatest Baker Competition Raises Over $1.3 Million for B+ Foundation