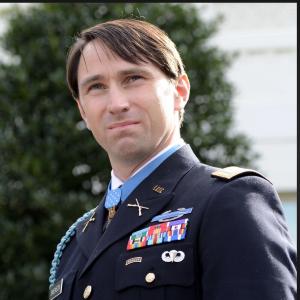 : “I love small towns, especially patriotic ones that honor Veterans like Corsicana, Texas and Navarro County. I was happy when my friend Bill McNutt invited me to be the 2022 Grand Marshall. “”

CORSICANA, TEXAS , USA, March 16, 2022 /EINPresswire.com/ — Corsicana, Texas – Afghanistan Medal of Honor holder William Swenson will be the Grand Marshall of the Texas Veterans Parade, Corsicana, Texas on Armed Forces Day, Saturday morning May 21, 2022. He will be honored by detachments from over a dozen military bases in Texas and Oklahoma.

The website is www.texasveteransparade.com The parade will honor current and past Military Veterans from all wars and conflicts.

Last May, the Texas Veterans Parade hosted the oldest holder of the Congressional Medal of Honor, Hershel “Woody” Williams, Iwo Jima 1945. This year one of the youngest recipients of the nation’s highest honor, U.S. Army officer William D. Swenson, Afghanistan 2009 will be honored. This year’s parade will be held by the Texas Veterans Parade organization and presented by the Corsicana Rotary Club.

In Afghanistan, on September 9, 2009, Army Captain Will Swensen and his combat team were moving on foot into a small village near the Pakistan border when they were ambushed by 60 well armed and well positioned enemy fighters. Rocket propelled grenades, machine gun fire, and mortars rained down on them for six hours. It became known as the Battle of Ganjgal.

Surrounded on three sides by Muslim fighters, Captain Swenson personally returned fire, while coordinating and directing the fire of his men. Enemy radio transmissions demanded his surrender. He responded with a grenade. This act of defiance rallied his comrades to repel the enemy advance. His exceptional leadership. selflessness and tough resistance turned what the enemy thought was going to be a massacre into a stalemate.

The Battle of Ganjgal also saw Capt. Will Swenson’s friend and fellow warrior Dakota Meyer also receive the Medal of Honor. Will Swenson was both a leader and a servant that September morning. Swenson will be the Grand Marshall of the Parade on Saturday morning May 21, and be the main attraction at the Medal of Honor Event at the 101 year old Palace Theater in Corsicana the evening before the Parade.

The parade will also honor two Corsicana and Navarro County heroes, Candelario “Spider” Garcia, 2014 Medal of Honor recipient, and the namesake of county, Jose Antonio Navarro, who signed both the Texas Declaration of Independence and the Texas Constitution.

A Texas Veterans Parade in Corsicana is not new. It is the reestablishment of a tradition that goes back more than 100 years. The World War I Armistice parade in 1918 and 1945 World War II Victory Parade and Rodeo drew thousands of Texans to Corsicana’s famous downtown, located one hour south of Dallas, Texas.

Still an active duty soldier, Swenson said: “I love small towns, especially patriotic ones that honor Veterans like Corsicana, Texas and Navarro County. I was happy when my friend Bill McNutt invited me to be the 2022 Grand Marshall. I look forward to meeting detachments from military bases all over Texas and Oklahoma who are kind to join me at the Parade on Armed Forces Day in America”

Texas State Senator Brian Birdwell, who has badly wounded at the attack on the Pentagon on 9/11 said “ Our Military bases in Texas and Oklahoma need occasions like this parade, on Armed Forces Day in America, for their troop morale, recruitment and to display their allegiance to our flag”.

Texas Veterans Parade Treasurer, Martin Blanchard said ” Our Veterans ensure the safety of our citizens, our democracy and our very way of life. I’m honored to contribute to our organizations mission of recognizing and celebrating them. :

Bill McNutt, the Texas Veterans Parade Founder and son a World War II Army Sergeant. Said; ” It is a rare moment in history when we watch the battle between tyranny and liberty unfold each night on our TV screens. Lets have a big Navarro County welcome to these soldiers, sailors and airmen the third Saturday in May. “

The 2022 Parade will start at 10am at the Gold Star War Monument located on the Navarro County House lawn in Corsicana, Texas. It will lead off with an honor guard, and the world famous Navarro College Cheerleaders of Netflix fame.

Parade CEO Elizabeth Green Brown said “We are searching for people with horses, antique cars and motorcycles to join detachments of soldiers from military bases from Texas and Oklahoma. Please call 214 537 9311 to be included.

About the TexasVeterans Parade, Corsicana

The Texas Veterans Parade, Corsicana exists to honor Texas Veterans from all Wars and Conflict and to teach our children about the sacrifices of Veterans, liberty and freedom. To reach the Parade Headquarters telephone 903-354 4628

The parade will start at ten AM on Saturday May 21, at the Navarro County Courthouse in Corsicana, Texas. The Medal of Honor Program at the historic Palace Theater in Corsicana starts at 5:30pm on Friday night May 20, 2021.

The post Texas Veterans Parade May 21, 2022 Honors Medal of Honor Recipient Will Swenson and all Veterans in Corsicana, Texas first appeared on Social Gov.