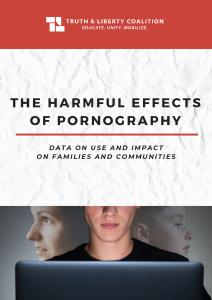 Data on use and impact on families and communities included

We have compiled some of the best research on the topic from leading sources—including official agencies and nonprofit organizations.”

“Pornography is one of the tools that is literally destroying the souls of the American people,” said Richard Harris, executive director, Truth & Liberty Coalition. “It has become mainstreamed in the United States, and its effects on our nation are shocking,” he said.

“We have compiled some of the best research on the topic from leading sources—including official agencies and nonprofit organizations,” Harris said.

The report is complete with data, historical timeline, and biblical perspective. Here are several findings from the report.

• Pornography ruins marriages. As satisfaction and intimacy are destroyed, marriages crumble. Viewing pornography increases the likelihood of seeking sex outside of marriage, which also increases the risk of sexually transmitted diseases and out-of-wedlock pregnancies.

• Pornography endangers children. Statistics show that kids raised in a home where a parent uses pornography are at increased risk of experiencing unhealthy sexual behavior, marital conflict, and parental neglect.

• Pornography is viewed by young people at alarming rates. While three quarters of parents deny their children have seen it, the data shows that by the time they reach 17, more than three quarters of teens have viewed pornography.

• Pornography attacks the dignity of men and women who are created in the image of God, also distorting God’s gift of sex which should be shared only within the bounds of marriage.

“Christians must become equipped to be ministers of grace and truth in this vital area.”

Harris also calls for legislation. “We must advocate for legislation that protects young people from internet pornography, keeps sexually oriented businesses out of neighborhoods, and gets sexualized materials out of public schools.” he said. “We must support entertainment that affirms wholesome sexual values and oppose that which does not.“

About Truth and Liberty Coalition: Truth & Liberty Coalition, Inc. is a 501(C)(4) non-profit based in Woodland Park, Colorado. Established by Andrew Wommack and other Christian leaders, the goal is to educate, unify and mobilize Christians and conservatives to become involved in the affairs of their community and government.

The post The Harmful Effects of Pornography first appeared on Social Gov.