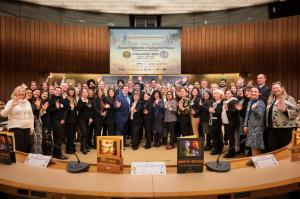 Speakers of the 74th Anniversary of the UDHR at Room XVIII of Palais des Nations, UN Geneva. 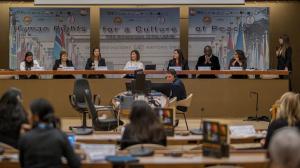 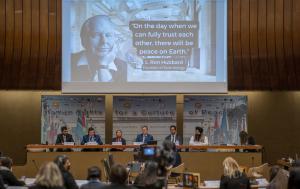 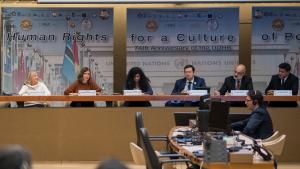 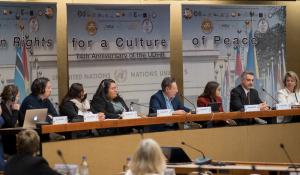 The NGOs “Diritti Umani e Tolleranza” and “Fundacion Mejora” held a full-day event to celebrate and discuss good practices to be strengthened.

On the day when we can fully trust each other, there will be peace on Earth”

GENEVA, SWITZERLAND, December 14, 2022 /EINPresswire.com/ — Over 30 speakers from Civil Society, Government, supranational organizations, Academia and Faith Communities, gathered in Room XVIII of the United Nations in Geneva with the slogan #HumanRights4Peace , to explore good practices and things to improve to achieve implementation of Human Rights, through a culture of Peace, in an event organized by the two NGOs with Special Consultative Status to UN ECOSOC, “Diritti Umani e Tolleranza” and “Fundacion Mejora”, two of the main NGOs in Europe that use the international educational program of United for Human Rights, strongly sponsored by Scientologists around the world.

As the 74th anniversary of the Universal Declaration of Human Rights (UDHR) ends and the 75th begins, we are confronted with a world divided into smaller and more militant factions and where the arts of dialogue and conversation are being lost to gun violence, fear, and hate.

At this moment in history marked by an ever-increasing lack of peace and understanding between human beings, when challenges of Human Rights keep arising day after day and where the arts of dialogue and conversation are being lost to gun violence, fear and hate, the United Nations UDHR remains one of the most important documents signed in the world’s history, as well as the most universal and comprehensive reference in the realm of human rights. And despite being a key tool for peace and inclusion, it keeps being extremely unknown to the general population and even civil servants from member states, impeding in this way its logical application even in daily day life.

In its Preamble, the UDHR emphasizes that “recognition of the inherent dignity and of the equal and inalienable rights of all members of the human family is the foundation of freedom, justice and peace in the world.”

So, where are we at on the implementation of Human Rights? What has been effective? How can Human Rights be even more instrumental in creating and widely spreading a culture of peace in every layer of society?

With a view to the future, the lectures explored good practices of States and Civil Society, separately and working together, that have resulted in improvements in the well-being and dignity of human beings.

The conference was inaugurated by the presidents of the 2 organizing organizations Ms Fiorella Cerchiara and Mr Ivan Arjona, together with Dr Kishan Manocha, Head of the Tolerance and Non-Discrimination Department at the OSCE Office for Democratic Institutions and Human Rights, and His Excellency Ambassador Irénéo Namboka VicePresident of AidO International, Human Rights adviser for the United Nations, former Human Rights Officer of The United Nations High Commissioner for Human Rights.

As Dr Manocha put it in the inaugural panel, the UDHR is “a document that calls us all to higher standards of being human and acting as human beings worthy of the name. For me, the Universal Declaration has never lost its magic. But this extraordinary document is not a monument to human progress, to be admired from afar, but is intended to be appropriated, to be owned by each generation as a blueprint, if you like, for taking concrete action to stand up for human rights and fundamental freedoms in our ongoing efforts to build a better world.”

The first panel covered the topic of “Educating the Youth on the Universal Declaration of Human Rights” as this promotes values, beliefs and attitudes that encourage all individuals to uphold their rights and those of others.

The second panel focused on “Faith and Human Rights”. The Master of Ceremonies quoted Professor Lucas Swaine when he said “Freedom of thought is the precursor and progenitor of other liberties, including freedom of religion, freedom of speech, and freedom of expression. It is the indispensable condition of nearly every other form of freedom. With rare deviation, a pervasive recognition of this truth can be traced in our history, political and legal.

This rich panel was moderated by Rev. Eric Roux, a Global for Europe of the United Religions Initiative (URI), probably the largest interfaith network existing today. Among the speakers were Mr Wissam al-Saliby, World Evangelical Alliance’s (WEA) Director of the Human Rights Office in Geneva; Ms Thinlay Chukki, Representative of His Holiness the Dalai Lama, The Tibèt Bureau; Gursharan Singh, General Secretary Sikhi Sewa Society; Dr Lakshmi Vyas, PhD President of Hindu Forum of Europe; Mr Iván Arjona, President of the European Office of the Church of Scientology for Public Affairs & Human Rights; and Mr Boumediène Benyahia, Islamologist – Secretary General and scientific referent of the Coordination of Islamic Organisations in Switzerland (COIS), Director of the Institute of the Word (Kalima), Ambassador for Peace (UPF), Secretary General of the association CRI-Voice of Victims.

The third panel, “Government, Article 18 – Universal Declaration of Human Rights and Peace”, tackled how some governments in Europe tackle Freedom of Thought, Religion and Belief, mentioning some of the good practices that assist in getting closer to a sense of social peace and what other aspects have room for improvement in the globalized society of today.

Mr Arjona introduced the moderator of this panel, Dr Kishan Manocha, as someone who has lived the issue both from a civil society viewpoint and government or supranational organization in his role at the OSCE/ODIHR. Speakers were from Italy, Prof Maria d’Arienzo, who is a Full Professor of Ecclesiastical Law, Canon Law and Confessional Rights at the Department of Law of the University of Naples “Federico II” and a Member of the Italian Interministerial Commission for Agreements with Religious Denominations; Mr Pasha Shah, Officer of the Order of the British Empire, Assistant Director at Department for Levelling Up, Communities and Local Government from the United Kingdom; Ms Inés Mazarrasa, Director of the Foundation Pluralism and Coexistence (Living Together), attached to the Spain Ministry of Presidency, Parliamentary Relations and Democratic Memory; and finally Ms Isabel Ayuso Puente, Attorney at law, Secretary General of the Fundacion para la Mejora de la Vida, la Cultura y la Sociedad, and awardee of the 2015 Religious Freedom Awards.

The Master of Ceremonies closed the event by saying that “the topic of Human Rights is vast, and we have just spent a crucial day together examining the state of the issue. We shared ideas, thoughts and plans, as well as concerns and hopes for the future. We took a look at the present and future activities, particularly those related to the elimination of different types of discrimination and human rights violations, manifested in all their forms. We shared a conceptual framework for a path to resilience that emerges from a collaboration between government and civil society.”

In conclusion, the different NGOs affirmed their dedication to increasing their joint actions and initiatives, to make individuals aware of their rights and responsibilities, so that we can faithfully trust each other. Because Peace could also mean trust, and as Humanitarian Freedom Fighter L Ron Hubbard put it: “On the day when we can fully trust each other, there will be peace on Earth.”

The Story of Human Rights

Article originally published on www.einpresswire.com as “this extraordinary document, not a monument to human progress, to be admired from afar”