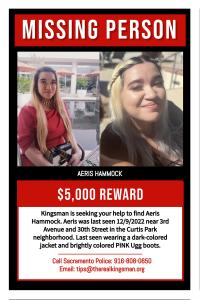 Sacramento Police are seeking the public’s assistance in locating Aeris Hammock, a 24-year-old woman from Roseville who has been missing since Dec. 9.

At no cost to the Hammock family, USPA has provided the assistance of one of our most experienced investigators, Rodney Brown, P.I., intelligence expert and veteran of the Navy’s elite SEAL Team 6”

SACRAMENTO, CALIFORNIA, USA, December 13, 2022 /EINPresswire.com/ — According to a FOX40 News release, Hammock’s parents state that she left their family home alone in her gray 2013 Ford Mustang around 1:30 PM on the 9th of December.

She was last seen by Ring cameras on Friday afternoon in the vicinity of 3rd Avenue & 30th Street in Sacramento, CA. On Monday, police released images captured by Ring cameras where she appears to be wearing a dark-colored jacket and brightly colored Ugg boots.

Sacramento Police have indicated that Hammock is considered “at risk” due to an undisclosed medical condition.

After losing contact with Aeris, her parents, Lelani and Charles Hammock initiated a search Friday evening. By roughly 10:00 PM that night, they were able to locate her vehicle parked in a cul-de-sac off 30th Street in Sacramento.

“The car was unlocked and the keys were in the car. We were able to track the vehicle because of her phone, which was in the glove box,” Aeris’s father, Charles, said.

Dee Ingrahm, a former Deputy Sheriff and family spokesperson, reported to the media that a substantial amount of data had been manually wiped from Aeris’ phone. “Everything was erased back at least six months on every single one. Somebody went to great lengths to erase a lot of information.”

“There are a number of things we don’t like to see with this case – for starters, the location she was last seen is a major crossroads with highways in all directions: north, south, east and west,” said Dan Manning, USPA’s CEO.

“Your heart breaks for the Hammock family; they are living every parent’s worst nightmare. Right now, it is essential to keep Aeris front of mind and in the media spotlight. This is crucial not only to raise awareness and generate leads, but also to fight against public apathy,” Fitzgibbons said.

At no cost to the Hammock family, USPA Nationwide Security has provided the assistance of one of their most experienced investigators, Rodney Brown. Brown is a licensed private investigator, intelligence expert and veteran of the Navy’s elite SEAL Team 6.